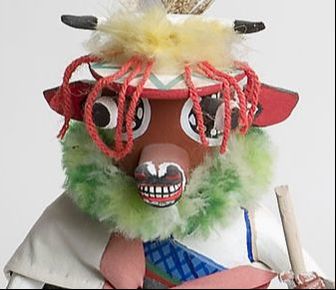 Hopi Kachinas are carved by the Hopi who live in the arid lands of northeastern Arizona.
The Hopi are bound together by their religion. One element of this multi-faced religion is the Kachina cult. The basic concept of the cult is that all things in the world have two forms, the visible object and a spirit counterpart.  Kachinas are the spirit essence of everything in the real world. A Kachina has three aspects:

Hopi religious ceremonies are marked by Kachina dances and divided into the year.  In these ceremonies groups of Hopi men are dressed and masked to take part as Kachinas.

When a Hopi man places a mask upon his head and wears the appropriate costume and body paint, he believes that he lost his personal identity and has received the spirit of the Kachina he is supposed to represent.  Hopi people believe that, through a priest the prayers of the people are given to the Kachinas to carry to the creator.

The children are given Kachina dolls at an early age not as toys but as objects to be treasured and studied so that the young may become familiar with the appearance of the Kachina Ceremony.  The dolls are hung up on the walls or from the rafters of the house, so that they may be constantly seen by the children of the family.  In this way Hopi children learn to know what the different Kachinas look like.

The Hopi recognize over two hundred Kachinas and frequently invent new characters. The Zuni are also known for their dolls, but produces far fewer dolls than the Hopi and of less variety.